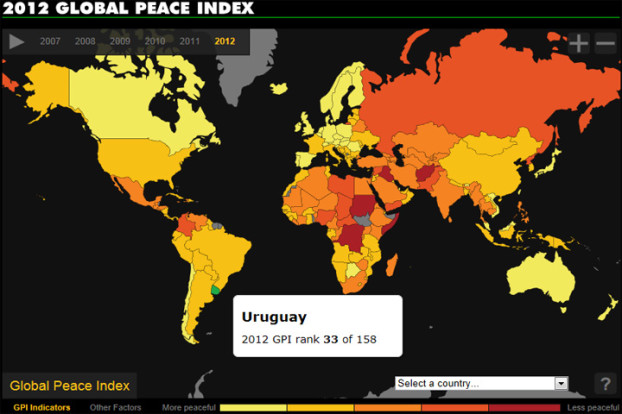 Global Peace Index
IT’S funny how reality and perception can differ when discussing crime and safety levels in South America as compared to the remainder of the world.

Results for Uruguay and Chile were not at all distinct from Australia (22nd) and the UK (29th).

Indeed, outside of Europe and Australasia, South America is the best performing region on the Peace Index.

Tellingly the GPI measures 23 factors which affect the safety of the population, from police levels to jail populations to threats of terrorism and engagement in international warfare.

One of the indicators is ‘Perceived Criminality’ for which Uruguay and Brazil receive a 3.0 and 3.5 rating respectively (with 5.0 being the worst), based on international impressions.

This would seem unfair when measured against the USA, which has a ‘Perceived Criminality’ rating of just 2.0 despite the reality of final figures.

Uruguay’s commendable position on the ladder sees the country ranked 3.0 or lower for all but one of the criteria assessed, that being demonstrations.

This high figure for demonstrations can be seen two ways, with the progressive leftist government providing an atmosphere where residents feel empowered to voice their concerns.

Brazil, which is ranked 44 spots better on the GPI than last World Cup host South Africa, appears down the list mainly because of its high figures for homicides.

However, as alarming as they may be, these homicide figures fell 62% in the Sao Paulo region in the last recorded decade from 1998-2008. In Rio de Janeiro the rate fell 39% over the same period.

Unsurprisingly studies have linked the majority of Brazilian homicides to drugs, alcohol, black market and gang-related behaviour. For the population outside these circles the rates are far less.

Ahead of the 2014 World Cup and 2016 Olympics Brazil will make orchestrated movements to increase the safety of visitors to the country.