1950 World Cup
A CROWD of 200,000 fans for the final, a country which wanted to play barefoot, a defending nation rocked by a plane crash and a sport recovering from the Second World War. Take a look back at the 1950 Brazil World Cup, the last held in South America:The World Cup of 1950 is one of the most notable in the history of football for a number of reasons, not least of all because of the cancellation of the 1942 and 1946 tournaments.

Both previous World Cups were abandoned due to the ongoing global conflict of World War II.

The hunt for a suitable host nation for 1950 was a difficult one, with Europe, North America, the Middle East and Asia still dealing with huge financial, social and political fallout.

Indeed many nations were either banned or chose not to participate depending on their particular alliances at that point in time.

Brazil was a fitting venue to end hostilities, with the nation of football fanatics largely excluded from both World Wars.

When play finally did get underway, it was with just 13 countries (as opposed to 32 in Brazil 2014), one of numerous quirks which would make 1950 a truly memorable event. 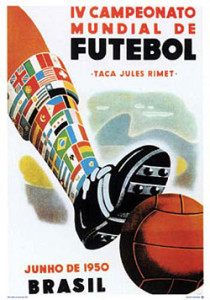 Brazil was on top going into the last match of the round robin and needed only to draw to ensure it took out the title on home soil.

A remarkable crowd packed out Rio de Janeiro’s Maracana Stadium to see their pride take on local rivals Uruguay. Though the official figure was 174,000, several reputable sources list the actual crowd as 200,000 or more.

Everything was going according to script when Friaca put the Brazilians ahead 1-0 in the 47th minute.

But in the blink of an eye, festivities turned to despondency when Uruguay pounced back, first through the boot of Juan Schiaffino in the 66th minute, then Alcides Ghiggia in the 79th minute.

Try as they might, the Brazilians could not claw back the ascendancy and for the second time in its history the Uruguayans (pop 2 million in 1950) held aloft the victors’ trophy.

Alcides Ghiaggia goes down in the history books to have scored in every World Cup match he played in.